Ten New Dentists Honored for Impact on the Dental Profession

by the Massachusetts Dental Society (MDS). Established by the MDS in 2005, the annual 10 Under Ten recognition highlights the diversity of new dentists in Massachusetts and their impact on the dental profession. To qualify for the recognition, dentists must have graduated from dental school within the past 10 years, be an MDS member, and have made significant contributions to the profession, their community, and organized dentistry.


The dentists were honored earlier this month at the Yankee Dental Congress® 2019 (Yankee) Awards Ceremony at the Boston Convention & Exhibition Center. Yankee, New England’s largest dental meeting, is presented by the MDS in cooperation with the dental societies of Connecticut, Maine, New Hampshire, Rhode Island, and Vermont.

This year’s honorees are:


The 2019 10 Under Ten honorees will be featured in the Spring 2019 issue of the Journal of the Massachusetts Dental Society.

About the Massachusetts Dental Society

The Massachusetts Dental Society (MDS), a professional association representing 5,000+ member dentists and a statewide constituent of the American Dental Association, is dedicated to the professional development of its member dentists through initiatives in education, advocacy, the promotion of the highest professional standards, and championing oral health in the Commonwealth. For more information, visit massdental.org, and follow the MDS on Twitter @MassDental. 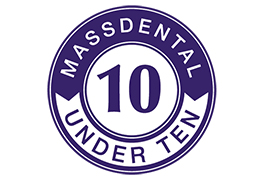