Toothpaste and Kids: A Little Dab Will Do Ya’

This article originally appeared in the Summer-Fall 2019 issue of Word of Mouth. Read the entire issue at massdental.org/Word-of-Mouth.

August 14, 2019 – It goes without saying that one of the keys to a healthy smile is regularly brushing teeth with a fluoride toothpaste. A naturally occurring mineral, fluoride helps prevent cavities in both children and adults by making tooth enamel more resistant to the acid attacks that cause tooth decay. However, when it comes to the little ones, too much toothpaste may be too much of a good thing. 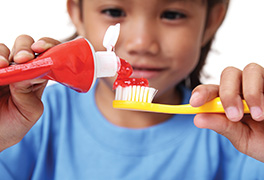 A study released earlier this year by the U.S. Centers for Disease Control and Prevention found that nearly 40% of children ages 3 to 6 use more than the recommended amount of toothpaste when brushing, putting them at risk for developing enamel fluorosis. Because the enamel on young children’s teeth is not completely formed yet, children under the age of 6 are at risk for the development of fluorosis, a condition that affects the appearance of teeth, resulting in faint white lines or streaks. Parents should note that fluorosis is not a disease and it doesn’t affect the health of teeth; it is strictly cosmetic, according to the American Dental Association (ADA). Younger children who consume too much fluoride—from any source—over long periods when teeth are developing under the gums could potentially develop fluorosis. In most cases, the effect is so subtle that only a dentist would notice it during an examination. And once teeth break through the gums (i.e., at around the age of 8), the chance of developing fluorosis ceases.

What steps can parents take to ensure their children have healthy teeth and gums without overdoing the fluoride? First, don’t stop using fluoride toothpaste, because extensive research over the past 70 years has shown that the health benefits of fluoride use far outweigh the risks. But parents should supervise their children’s brushing not only to make sure they are brushing correctly and for the right length of time (two minutes twice a day is recommended), but also to ensure that they use the appropriate amount of toothpaste and are not swallowing it.

According to the ADA, children under the age of 3 need only a “smear” (the size of a grain of rice) of toothpaste and kids ages 3 to 6 need only a “dab” (the size of a pea). Children under 3 are too young to brush their own teeth, so parents will need to take charge of that task, while children ages 3 to 6 can brush their own teeth under the watchful eye of Mom and Dad. Since many cases of fluorosis can be prevented by keeping children from swallowing fluoride products like toothpaste, parents should keep a close eye on their children’s brushing and remind them not to swallow the toothpaste.

For your child’s optimal oral health, be sure she or he is brushing with the right amount of the right stuff—fluoride toothpaste. Not doing so could put your little one at risk for tooth decay, the most common chronic disease in children.