An Eating Plan for Healthy Gums

This article originally appeared in the Summer-Fall 2019 issue of Word of Mouth. Read the entire issue at massdental.org/Word-of-Mouth.

July 17, 2019 – We are constantly inundated these days with social media posts and news stories touting popular diet trends. Paleo, keto, Whole 30, intermittent fasting, vegetarian, vegan, pescatarian, fexitarian, low carb, no carb . . . you name it. When deciding to embark on a healthy eating journey, it can be overwhelming to determine which plan is right for you. The obvious through line for all of these plans is that what you eat affects your health, but did you know that includes your oral health? Research shows there is a link between your oral health and your overall health: Teeth and gums hold important clues to other systemic health issues. In fact, gum (periodontal) disease has been directly linked to serious health conditions, including cardiovascular disease, stroke, diabetes, osteoporosis, and low-birth-weight and/or premature births. Now, a study from German researchers indicates that another diet trend, the anti-inflammatory diet, may help ward off gingivitis, which is the early stage of gum disease. 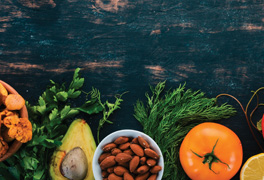 The study, published last spring in the Journal of Clinical Periodontology, investigated the influence of an anti-inflammatory diet on 30 patients with gingivitis. The researchers randomly placed half of the study subjects in a group that had to adopt an anti-inflammatory diet, which is high in vitamin and anti-oxidant-rich fruits and vegetables, whole grains, plant-based proteins, and fatty fish; the control group did not have to change its diet. Both groups were instructed to cease flossing for the duration of the four-week study. While the results showed no difference between the groups in terms of level of plaque—the film that builds up between the teeth and gums that leads to gum disease—it did show that study participants on the anti-inflammatory diet had significantly less gum bleeding and a marked increase in vitamin D levels, as well as significant weight loss.

Recommended by physicians and nutritionists to people suffering from autoimmune diseases and other inflammatory illnesses, such as rheumatoid arthritis and lupus, an anti-inflammatory diet consists of plenty of fruits and vegetables, whole grains, plant-based proteins (like beans and nuts), healthy fats like olive oil, and fatty fish with omega-3 acids (think salmon, tuna, and sardines). It also calls for eliminating refined, processed, and manufactured foods (e.g., fast food) from your diet. Researchers, like those at the Harvard School of Public Health, believe that by choosing the right anti-inflammatory foods, you may help reduce your risk of illness and that by eating foods that cause inflammation, such as fried food, refined carbohydrates (e.g., white bread), red meat, margarine, soda and sugary beverages, and highly processed foods, you could accelerate inflammation in your body.

Why is inflammation an issue? Inflammation is the body’s instinctive reaction to fight off infection, protect against injury, and shield against irritation. Inflammation can be characterized by swelling, redness, heat, and pain around the affected area. While inflammation initially aims to heal the body, over time chronic inflammation can lead to dysfunction of the infected tissues and is linked to diseases like cancer, diabetes, arthritis, depression, Alzheimer’s, and heart disease. Gum disease is considered an inflammatory disease, with periodontitis—its advanced stage—affecting 47.2% of U.S. adults over the age of 30, according to the American Dental Association.

The foods and beverages that you put into your mouth impact your oral health, because when you eat or drink anything, the bacteria that are already present in your mouth convert the sugar and starch in these items into acids, which attack the enamel on your teeth and cause tooth decay. When the bacteria in plaque builds up between your teeth and gums, it causes the gums surrounding the teeth to become inflamed. If the inflammation is not treated and becomes more severe, it can cause the gums and supporting bone structure to deteriorate, leading to gum recession, pocketing (separation of the gum from the tooth, allowing bacteria to collect under the gums and along the roots), loose teeth, and tooth loss. Signs of gum disease include bleeding or puffy gums, loose or shifting teeth, chronic bad breath, and receding gums. If you notice any of these symptoms, see your dentist.

In addition to kicking the sugar habit and adopting healthier eating habits, like an anti-inflammatory diet, you can lessen your risk of gum disease by brushing for two minutes at least twice a day with a fluoride toothpaste and flossing every day, along with visiting your dentist twice a year.