You know that smoking is bad for your health, so it should be no surprise that e-cigarettes, vape pens, and other tobacco products also can be harmful to your oral health.

Smoking and tobacco products can cause bad breath and stained teeth, but that’s only the beginning. Possible oral health impacts of smoking and all tobacco products include:
Cigarettes, cigars, and pipe tobacco are made from dried tobacco leaves. Other substances are added for flavor. The smoke from these products is a complex mixture of harmful chemicals produced by burning tobacco and its additives.

According to the American Cancer Society, at least 70 of the chemicals in tobacco smoke are known to cause cancer, including nicotine, formaldehyde, lead, arsenic, ammonia, benzene, carbon monoxide, and others. Some of these substances also can cause heart disease, lung disease, or other serious health problems.

The tobacco product landscape continues to evolve to include smoked, smokeless, and electronic products, such as e-cigarettes. E-cigarettes, which entered the U.S. marketplace around 2007, are designed to deliver nicotine, flavorings, and other additives via an inhaled aerosol. They are known by many different names, including “e-cigs,” “ehookahs,” “mods,” and “vape pens.”

While smoking e-cigarettes may pose fewer health risks than smoking regular tobacco cigarettes—the leading cause of preventable death in the United States—it is by no means harmless. E-cigarettes still contain nicotine—the addictive drug in regular cigarettes, cigars, and other tobacco products—which increases the risk of high blood pressure and diabetes. Many also include flavoring agents that may cause a chronic lung disease called bronchiolitis obliterans. And the aerosol that is inhaled and exhaled from e-cigarettes can potentially expose users and bystanders to other harmful substances, including heavy metals, volatile organic compounds, and ultrafine particles that can be inhaled into the lungs.

E-cigarettes also can have a significant impact on oral health. A study supported by the American Dental Association Foundation determined that vaping sweet e-cigarettes can increase the risk of dental cavities. Scientists evaluated e-cigarette aerosols and found that they have similar properties to high-sucrose, gelatinous candies and acidic drinks. Additionally, the nicotine in e-cigarettes reduces blood flow, restricting the supply of nutrients and oxygen to the soft tissues of the mouth. This can cause the gums to recede and exacerbate periodontal diseases. Reduced blood circulation also inhibits the mouth’s natural ability to fight against bacteria, which can accelerate infection, decay, and other problems. There have even been reports of e-cigarette explosions and fires in the oral cavity while vaping.

For adults, e-cigarettes may have the potential to reduce health risks for current smokers if they completely transition from cigarettes to e-cigarettes; however, most adults who vape also smoke cigarettes. According to a 2018 National Academy of Sciences, Engineering, and Medicine report, there is moderate evidence that vaping increases the frequency and intensity of cigarette smoking in the future.

Many e-cigarettes come in kid-friendly flavors, and a new type of e-cigarette has become increasingly popular among young adults due to its minimal exhaled aerosol, reduced odor, and small size, making it easy to conceal. Many of these products look like a USB flash drive, with a typical cartridge, or “pod,” containing as much nicotine as a pack of 20 regular cigarettes.

The U.S. Surgeon General called the recent surge in youth vaping an “epidemic” and issued an advisory emphasizing the importance of protecting children from a lifetime of nicotine addiction and associated health risks.

Any e-cigarette use among young people is unsafe, even if they do not transition to cigarette smoking. Nicotine exposure during adolescence can harm the developing brain, which continues to develop until around age 25. Nicotine also impacts adolescents’ learning, memory, and attention, and it can increase their risk for future addiction to other drugs.

A 2019 report from the U.S. Centers for Disease Control and Prevention (CDC) indicated that overall tobacco use among youth is rising, driven by a spike in e-cigarette use. From 2017 to 2018, the CDC found no significant change in the use of combustible tobacco products by teens, but e-cigarette use increased 77.8% among high school students and 48.5% among middle school students. In 2018, there were 1.5 million more current youth e-cigarette users than in 2017, according to the CDC. Among youth, e-cigarettes are the most commonly used tobacco product, ahead of cigarettes, cigars, smokeless tobacco, hookah, and pipes. And e-cigarettes are the most commonly used product in combination with other tobacco products.

Reducing tobacco use is a priority issue for the Massachusetts Dental Society (MDS) due to the oral health complications caused by smoking and tobacco products.

Massachusetts has made great progress in reducing rates of youth cigarette smoking, but the wave of new addictive tobacco and nicotine products targeted to youths requires responding in new ways to protect young people.

In November 2019, the Massachusetts Legislature passed and Governor Charlie Baker signed into law An Act to Modernize Tobacco Control, which bans the sale of all flavored tobacco products, including flavored e-cigarettes and menthol-flavored cigarettes; creates an excise tax for e-cigarettes and vape products on par with the excise tax on cigarettes; and requires insurance coverage for tobacco cessation counseling and nicotine replacement therapies. With this legislation, Massachusetts became the first state in the country to ban menthol cigarettes.

The MDS applauded the passage of this legislation, noting that banning all flavored tobacco products and taxing e-cigarettes will have a significant impact in the fight to make sure that young people grow up without the burden of tobacco and nicotine addiction.

Additionally, the MDS supports An Act to Provide Medicaid Coverage for Tobacco Cessation, which would close loopholes in the MassHealth tobacco cessation benefit and expand access to cessation counseling by allowing trained and approved dentists and behavior health practitioners to provide cessation counseling to patients on MassHealth, as recommended by the U.S. Centers for Disease Control and Prevention.

In 2018, Governor Charlie Baker signed into law An Act Protecting Youth from the Health Risks of Tobacco and Nicotine Addiction, which raised the legal age to buy tobacco products statewide from 18 to 21. Effective January 1, 2019, the law also added e-cigarettes to existing prohibitions on public smoking and prohibited the use of tobacco products on the grounds of any primary, secondary, or vocational school. Additionally, the law prohibits the sale of tobacco products by any pharmacy that offers health care services. California, Hawaii, Maine, New Jersey, and Oregon have enacted similar restrictions.

The MDS advocated for this legislation to help lower smoking rates among youth and reduce serious oral health consequences. The MDS partnered with fellow members of the Tobacco Free Mass Coalition to advance this legislation, which passed the Massachusetts House and Senate by large margins.

Once you start smoking or using tobacco products, the addictive quality of nicotine—found in traditional cigarettes, e-cigarettes, cigars, and chewing tobacco—can make quitting especially difficult. Talk to your dentist or doctor for resources on quitting, including:

For more inspiration to quit, check out the Tips From Former Smokers® campaign from the Centers for Disease Control and Prevention. Watch TV ads and get to know the real people who appear in them. You can also watch videos to hear how smoking has affected their lives. 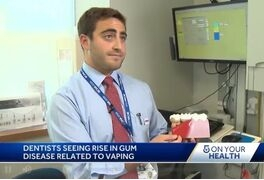 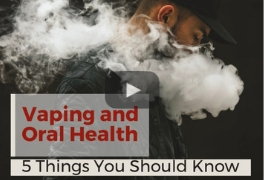 5 Things You Should Know

Watch this Word of Mouth video to learn how vaping can impact your oral heath. 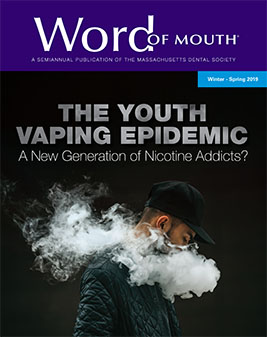 Word of Mouth
Everyone knows that smoking is bad for your health. But what about e-cigarettes? And vaping? Do they pose the same health threats? Download Issue