Dentists have a responsibility to provide safe and effective pain relief for their patients while at the same time limiting the prescription of opioids to an appropriate amount. Dentists play a vital role in preventing the abuse and misuse of prescription medications.

The MDS is committed to helping its members provide safe and effective pain control for their patients by utilizing evidence-based prescribing practices applying non-pharmacological strategies as well as non-opioid and opioid pain medications as appropriate.


As part of Governor Charlie Baker’s Working Group on Dental Education on Prescription Drug Misuse, Massachusetts dentists were the first in the nation to partner with the Commonwealth’s three dental schools to announce a set of dental education core competencies for the prevention and management of prescription drug misuse. Massachusetts dentists also worked with policymakers to enact landmark legislation limiting opioid prescriptions to a seven-day supply for minors and first-time adult prescriptions. This legislation, passed in 2016, also included mandatory continuing education and prescription monitoring requirements.

The MDS supports:
In 2018, the American Dental Association announced a policy to combat the opioid epidemic impacting the United States. This policy is fully aligned with the position of the MDS.

Most opioids prescribed to patients in the United States are written by physicians and other medical professionals for management of chronic (long-term) pain. Dentists with an appropriate license may also prescribe opioids, typically for management of acute (short-term) pain, such as severe tooth decay, tooth extraction, or root canals.

According to the U.S. Department of Health and Human Services, health care providers began to prescribe opioid pain relievers at greater rates in the late 1990s, following reassurances from pharmaceutical companies that patients would not become addicted. Increased prescription of opioid medications led to widespread misuse of both prescription and non-prescription opioids before it became clear that these medications could indeed be highly addictive.

By 2016, at least 130 people died every day from opioid-related drug overdoses in the United States, and up to 40% of opioid overdose deaths involved a prescription opioid. Approximately 11.4 million people misused prescription opioids. In 2017, the U.S. Department of Health and Human Services declared a public health emergency and announced a Five-Point Strategy to Combat the Opioid Crisis.

Opioids and Oral Health: Get the Facts


Here are some key facts about prescription opioids and teens:

While each patient is unique, many dentists are now considering non-steroidal anti-inflammatory drugs such as ibuprofen and acetaminophen as the first-line therapy for pain management. Across all age groups, dentists in the United States wrote nearly half a million fewer opioid prescriptions over a five-year period, from 18.5 million in 2012 to 18.1 million in 2017.

Massachusetts dentists are committed to being leaders in curbing opioid misuse by following responsible prescribing practices and utilizing non-opioid alternatives where appropriate. According to the Massachusetts Prescription Management Program, dentists issued 45% fewer opioid prescriptions in 2018 than in 2015, and they prescribed the medication in much smaller quantities.

What to Ask Your Dentist Before Taking Opioids

The oral health community is committed to protecting patients and doing its part to address the epidemic of opioid abuse. Helping patients have thoughtful conversations with their dentist is a critical step in the process.


Before you agree to an opioid prescription for yourself or your child, get the facts and ask questions:

If you or your child has been prescribed an opioid medication, be sure to follow these safety guidelines:

Do your part to safely dispose of any unused opioid medications:

If you or someone you know needs help with opioid addiction or treatment resources, please visit: 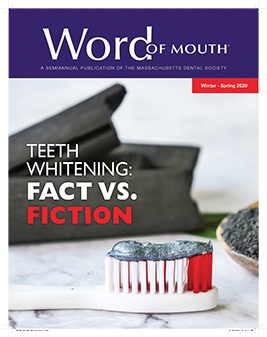 When it comes to teeth whitening, how do you separate fact from fiction? Also in this issue: marijuana and your oral health.